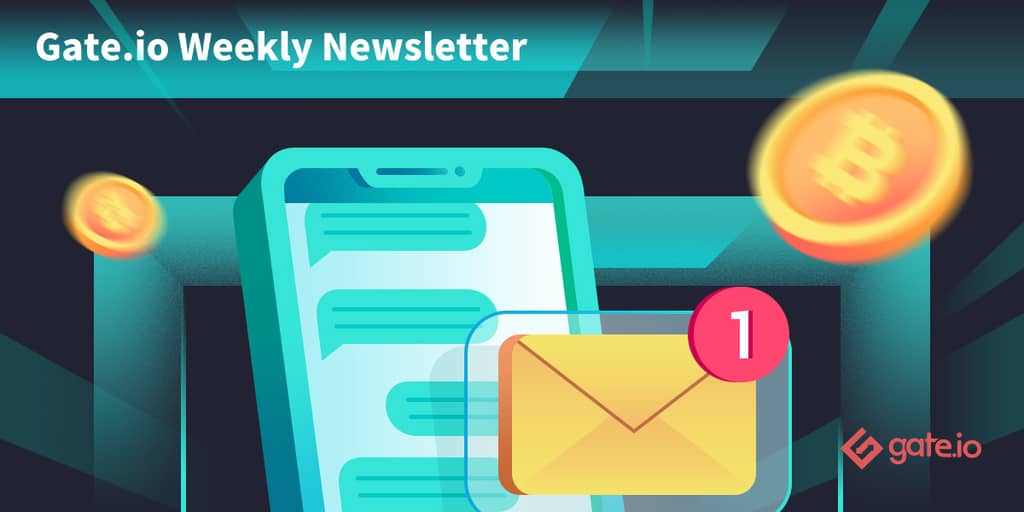 TL;DR? Listen on the Go!

The birth of Bitcoin has given birth to an entire new world. Gate.io believes that through scientific, intelligent, and leading-edge blockchain applications, we can promote the world's economy, social development, and the progress of people's lives. Engaging in such a complex industry requires like-minded peers. We welcome blockchain talents from all over the world to join Gate.io and work together to bring secure and innovative blockchain services to our global clients and partners. Learn more

The first five days this week had performed relatively weak, and on the 5th day the cryptocurrency market took another big dive.

Bitcoin fell sharply again this Thursday, and by Friday, the spot price of Bitcoin had fallen below $40,000. And the ethereum spot price fell below $3,000.

This drop is not a technical adjustment, but a policy shock. This drop is a market-wide and its duration may extend into next week. The market is currently in a state of extreme panic, and the rebound may be weak when the market enters the retracement range again.

Musk's tweet may imply a state of chaos in the Metaverse

Elon Musk tweeted a short 10-second video with the text "I fought in the metaverse prison yard where I spent a lot of time taking screenshots of NFT", suggesting that the current metaverse and NFT markets are disorganized.

El Salvador, the first country to make Bitcoin (BTC) a legal tender, has onboarded 4 million users for its government-backed BTC wallet Chivo in partnership with digital identity provider Netki, according to an announcement.

Chivo has been instrumental in making El Salvador the first country to make using Bitcoin as easy as fiat. Apart from transferring money worldwide, Chivo wallets are being used for daily transactions at restaurants, cafeterias, malls and every other retail market.

The government has also deployed hundreds of Bitcoin ATMs across the country that facilitates millions in cross-border remittance. Chivo has managed to do what banks haven’t been able to do in decades.

In a summit hosted by the Global Wealth Management Forum, the founder, CEO, and chief investment officer of Ark Invest stated that Bitcoin is the first global private digital currency system, which is based on rules.

Citing the example of China where the majority of miners have already left for crypto-friendly shores owing to its administration crackdown. Wood also mentioned some parts of the world are yet to warm up their stance on digital assets, although their attitude is not as harsh as that of the Chinese government.

Ark Invest has reportedly bought nearly 6.9 million shares of the special purchase acquisition firm or SPAC, that is merging with Circle, for $70.6 million through the company’s ARK Fintech Innovation exchange-traded fund [ETF].

Abandoned TON Crypto Project Could Be Returning to Telegram

The Russian social media giant Telegram’s once-grand crypto plans may be dead and buried, but developers working on a network based on the abandoned Telegram Open Network (TON) are edging closer to launching their own version of TON.

The TON platform, which was to make use of a coin named the gram, was set to become the world’s first true big tech firm-run altcoin – before an eleventh-hour intervention from American regulators effectively derailed it.

And now, from the ashes of the abandoned network, some developers associated with the firm’s project continued working on an offshoot they called Free or Open TON – and have since rebranded as Toncoin.

One developer, Oleg Andreev, was quoted by Forbes as stating that the network was being built in a manner that would let it integrate into the Telegram platform – and would have interoperability with crypto exchanges. He added that its payment system could be used in the gaming world to buy in-game items and currencies and on content platforms.

The SEC's decision comes around four weeks after it rejected investment firm Kryptoin's proposal to list a spot Bitcoin ETF. The commission had previously rejected spot Bitcoin ETF proposals from VanEck and WisdomTree.

The eventual rejection filed Thursday of the proposed First Trust SkyBridge Bitcoin ETF Trust comes as no surprise given the precedent set by the SEC for a preference toward ETFs that track the bitcoin futures market, rather than the asset itself.

Italian luxury fashion house Prada and sportswear giant Adidas, which recently ventured into the metaverse, have joined forces to launch a new non-fungible token (NFT) project built on the Polygon network. The project will allow fans to contribute their own designs.

Prada and Adidas Originals said they will auction a collection of NFTs designed by the digital artist Zach Lieberman on SuperRare between Jan. 28–31. The proceeds from the NFT sale will be donated to a charity supporting artists and creators.

From Jan. 24, fans will be able to register with a digital wallet to create and mint NFTs by submitting a photograph, using a filter designed by the digital artist Lieberman. The project will then choose 3,000 contributors who will also own IP rights to their individual NFTs and be able to take part in the drop later that week.

Dubbed the Bloomberg Grayscale Future of Finance Index (BGFOF), it tracks 22 companies associated with several crypto-linked equities as well other firms in the broader fintech space, according to a press statement released Wednesday.

The index will not directly invest in digital assets or their derivatives but will offer indirect exposure to crypto-linked equities. These crypto-linked equities will be rebalanced on a quarterly basis and cover market segments like exchanges, asset management, mining, and blockchain technology, among others.

Mercado Libre's relationship with Paxos is not new. In December 2021, the e-commerce giant integrated Paxos’ blockchain infrastructure to allow users of its digital wallet, Mercado Pago, to buy and sell Bitcoin, ether and the stablecoin Pax dollar (USDP) in Brazil, with a minimum amount required of 1 Brazilian real.

Mercado Bitcoin raised $250 million in 2021 and reached a valuation of $2.2 billion. With a presence in Brazil, it plans to expand into Argentina, Chile, Colombia and Mexico, either organically or through acquisitions.

Iran’s Central Bank Digital Currency (CBDC) will be called the digital Rial and will be pegged to Rial, the country’s currency.

Erik Thedéen, vice-chair of the European Securities and Markets Authority, told the Financial Times that Bitcoin mining had become a “national issue” for his native country Sweden and warned that cryptocurrencies posed a risk to meeting climate change goals in the Paris agreement.

Bitcoin and ether, the two largest cryptocurrencies by volume, both rely on a proof of work model, requiring all participants on the blockchain digital ledger to verify transactions. Miners, who use sprawling data centres filled with fast computers to solve complex puzzles, are rewarded for recording transactions with newly minted coins.

“The solution is to ban proof of work,” said Thedéen, who is also director-general of Sweden’s Financial Supervisory Authority and chair of sustainable finance for international body Iosco. “Proof of stake has a significantly lower energy profile.”

Likening cryptocurrency to supply-chain disruptions, inflation and climate change, Modi said "the kind of technology cryptocurrency is associated with makes decisions taken by one country inadequate to meet the challenges posed by cryptocurrency. We have to have common thinking."

The Indian government has yet to formulate its own regulatory framework for crypto assets, and has already decided to study regulatory measures elsewhere and how global standards on cryptocurrencies evolve. The Finance Ministry has reached out to the Bank for International Settlements (BIS) to frame its legislation.

The country's draft cryptocurrency bill probably won’t become law until after the year’s Budget Session ends in April. The bill has reportedly evolved from prohibiting all private cryptocurrencies while allowing “for certain exceptions to promote the underlying technology" to enabling cryptocurrency to be used as an asset, but banning its use as currency or payment.

Russia proposes ban on use and mining of cryptocurrencies

Russia's central bank on Thursday proposed banning the use and mining of cryptocurrencies on Russian territory, citing threats to financial stability, citizens' wellbeing and its monetary policy sovereignty.

The move is the latest in a global cryptocurrency crackdown as governments from Asia to the United States worry that privately operated and highly volatile digital currencies could undermine their control of financial and monetary systems.

Russia is the world's third-largest player in Bitcoin mining, behind the United States and Kazakhstan, though the latter may see a miner exodus over fears of tightening regulation following unrest earlier this month.

The central bank, which is planning to issue its own digital rouble, said crypto assets becoming widespread would limit the sovereignty of monetary policy, with higher interest rates needed to contain inflation.


Gate.io Weekly Blogs:
TREND OF BITCOIN
DeFi 1.0 to 3.0 ：What is next？
‌Crypto Events Not to Miss in 2022
What are memecoins, and can they make you rich?
BTC Whale Holders: Is it possible to know who they are?
The Gamestop NFT Marketplace - What is known and why now


Author: Byron. B & Charles. F & Peter. L (Gate.io Researchers)
* The article only represents the researcher’s views and does not constitute any investment advice.
* Gate.io reserves all rights to this article. Reposting of the article will be permitted provided Gate.io is referenced. In all other cases, legal action will be taken due to copyright infringement.
Share with：
Follow us：
Trending
UST Decoupled from the US Dollar and LUNA Slumped by 60%
Luna Fell by More than 95% in a Single Day. What Is the "Death Spiral" Leading to Hell?
The Whole Story of Musks Acquisition of Twitter
Optimism Released an Article to Recall the Course of the Project, Maybe Will Airdrop Management Tokens
Luna Chain Reaction Poses Significant Capital Loss, and the Security of DeFi Financial Products Initiates Dispute
Claim 20 Point now
Exclusively for Newcomers: complete 2 steps to claim Point immediately!